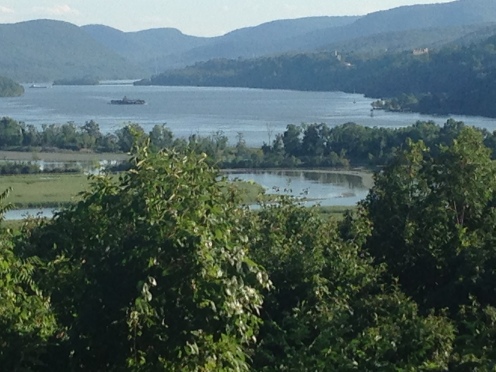 Summer would not be if not without Shakespeare. Somewhere, there is a performance  of one of his plays against a scenic backdrop that melds with the production and I go. I am not dumb but I am not Shakespeare smart. In today’s era, Shakespeare used a lot of language that confused the simple soul. The “prevey thee and thou are nots” was language of the time yet is not easily understood by anyone of the 20th or 21st century. I have gone to a production of Shakespeare in the Park since my 20s. I saw Meryl Streep play  Kathrine against Raul Julia’s Petruchio. I saw Richard Dryfuss as Iago in Othello. The draw, however was not just the play but the atmosphere of the Delacourt Castle. If the play was performed in a dungy Broadway theatre, it becomes one of many theatre productions vying for the price of a ticket and I would not be interested. In Central Park, however it is a magical.

This week, Tony and I went to Boscobel . It is the home of the Hudson Valley’s Shakespeare Festival in an outdoor theater overlooking the Hudson River with West Point’s military stature looming in the background. Ticket holders rolled their picnic coolers to their spots to feast on their dinner of smoked salmon, kale salad and Sauvignon Blanc. I wondered whether they were there for Shakespeare or like me, for the atmosphere.

My husband, who couldn’t be concerned about the likes of a Shakespearean, came with me for the experience and because he is a nice guy. The play was “As You Like It” – not one of my favorites or by any means and not one that would entice a non-Shakespearean to be a fan. I fed him cliff notes hoping to keep him from checking his phone every 5 minutes.  The opening line “All the World’s A Stage”wasn’t enough to grab his attention. I don’t blame him. Next time, I’ll try for Romeo and Juliet.

In college I took a course entitled “Understanding Shakespeare”for the sole purpose of getting more out of the plays than just the backdrop of the New York skyline. We studied the Tempest and Coriolanus. After understanding the Tempest, it occurred to me that the Bard usually throws in several plots to counter or confuse the viewer. Nevertheless, I liked the Tempest and learned that stories are many times peppered with magical outcomes (i.e. Jon Snow’s return in Game of Thrones). Coriolanus, however was in the lines of a brutal warrior who did not play the games of politics to win support (how unique).

To help in understanding the language of Shakespeare, our final class project was to take a scene from any of our readings and offer a different scenarios of the same scene. I picked a scene from Coriolanus where he was confronted by his mother. As is no surprise, the scene is dominated by the mother, Volumnia.

Volumnia: Why does thou not speak? (translation – What’s the hell is the matter with you. Why don’t you talk to your mother anymore!! You never call.).Next scene: Volumnia tells her daughter-in-law how she raised Coriolanus to be a great soldier, and takes more enjoyment from his victories than she would from a husband’s embrace. (interpretation: “I gave up my life to you and you are a rotten son”. )

I wish I could write like Shakespeare but take comfort that I am not any of his characters. They are miserable soul searching people that are better off dead which most of the characters in his plays usually end up being.